Jackie Damsky & String River is the unique genre-bending acoustic trio featuring Jackie Damsky on passionate violin & sweet vocals, supported by gifted guitarists Rich Caloggero and Bryan Tucker. Their material reflects each member's broad range of style, as they perform jazz standards, folk waltzes, country blues, bluegrass, pop, gypsy jazz, and more. They joyously share the emotional essence and nuance of the music they love, and are guaranteed to move and delight you.

Lullaby of the Leaves at ROM 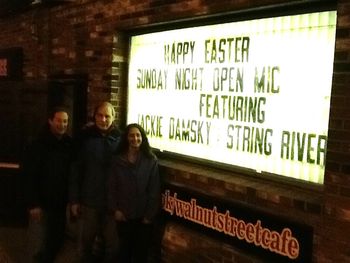 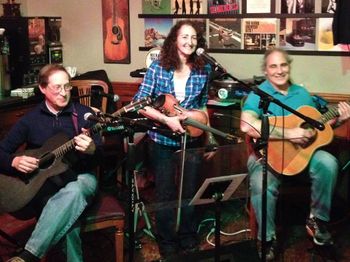 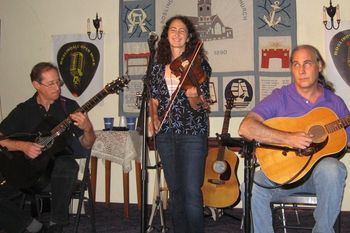 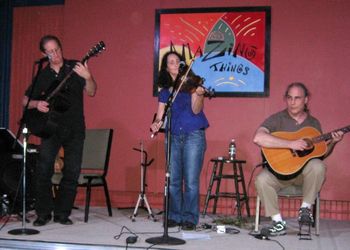 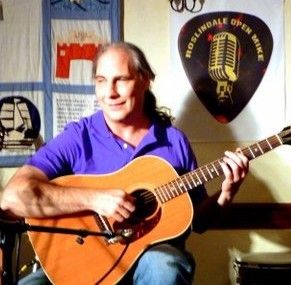 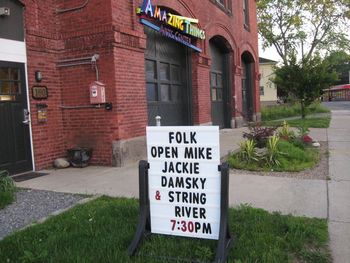 Violinist and vocalist Jackie Damsky, was originally trained in the classical violin tradition. Since joining the Cambridge music scene in 2001, Jackie has developed a unique improvisational style over a range of genres including jazz, folk, blues, acoustic rock, and popular music. Jackie's warm, sweet, passionate and evocative violin playing leaves listeners profoundly affected and deeply moved. She is a highly sought-after accompaniest, and has now performed with over 40 musical acts and recorded with more than 2 dozen artists in the Boston area. She also has performed in Spain, France and Italy with Rod MacDonald, has opened for the Goo Goo Dolls with Adam Ezra in Las Vegas, and has a violin cameo appearance in the major motion picture Bride Wars. Jackie weaves a harmonic tapestry with her fellow musicians, adding depth, color, richness... and a little magic.

Rich Caloggero has been playing guitar for over 25 years. He has played clubs and streets from San Francisco to Boston, from Maine to West Virginia, as well as toured Ireland and Britain with political songwriter Dave Rovics. He can be found playing styles ranging from rock-n-roll, blues, bluegrass, country, folk, and funk, to jazz. Rich is a lightning-fingered and crowd pleasing lead player. His influences include Jerry Garcia, Mark Knopfler, Tony Rice, David Grisman, Jerry Douglas, and our own local great Kenny Selcer.

Bryan Tucker is a Boston-based guitarist and teacher. Playing for 40+ years, he has developed interests that range broadly from jazz, blues, rock, and folk to classical music, with a special love for bossa nova and modern gypsy jazz. His sensitive touch with his instrument and joy in making music come through, whether he is playing rhythm or fingerstyle guitar. His influences include Eric Clapton, Leo Kottke, Paco de Lucia and Pat Metheny. Since moving to the Boston area in 1981, Bryan has performed at special events, gatherings, and private school musical theater, and continues to play regularly with an assortment of musicians as well as provide instruction for beginning guitarists of all ages.

“Your music transcends the space you play in to make it warm, inviting and welcoming to all who come to listen. It was wonderful for me to be able to hear the colors of sounds cascading and painting this amazing picture that I often do not get to hear.” ~Annie Rich (Singer-Songwriter)

“Your playing is simply exquisite! So incredibly gentle, and appropriate...and there were times, your strings almost sounded like a beautifully delivered vocal harmony...so very sweet”. ~ Lori Diamond (Singer-Songwriter)

“I love the joy you bring to music. It's what I strive for in live playing ~ Seth Connelly (Performer, Recording Engineer & Producer)

~ Jackie Damsky makes the violin sing, cry, and jump for joy in the most beautiful fashion.
Lisa Housman of Sweet Wednesday (musical duo)

Jackie Damsky & String River debuted January 15th, 2011 at the historic Nameless Coffeehouse in Harvard Square, Cambridge, MA. We were extremely fortunate to be reviewed by John Brisbin, longtime staff writer for Living Blues Magazine (bio following review).
*Note - when this review was written, it included band member Paul Mageau. He since has left the group, and Bryan Tucker has joined us.

I tell my musician friends: “You are the heroes and, okay, the loons who rob yourselves of sleep ritually, who drive forever, who are seldom properly paid or recognized; but who make life in Boston --even serial blizzard Boston in January-- a nightly vacation. Oooh, you take us away,” I tell them. “You make us laugh out loud. You light up our dreams and salve our wounds. You give us grace we don’t have; even wings to fly home over the moon-mirroring Charles River and safely over all police cruisers lurking in the bushes between there and here!”
Ehh, something like that I tell them. I also pass the clipboard during intermission, getting people to sign their email lists and build up the fan base. That’s my special talent. I bug everybody but gently.

For several years, the secret weapon of many Boston bands has been Americana and jazz fiddler Jackie Damsky. She is the extra ingredient that makes all the good bands sound better. And when bands that are already three aces show up, she’s the fourth ace -- and watch out. You’d better hide behind furniture because they come out blazing. One and all of her musical partners are beneficiaries of the wit and heart that flow from her bow. She leaps in, builds melody, soars like a skyrocket, then returns to earth for a deft finish always respecting singer, song and group.
Now she could’ve been content with that. That’s hero enough, don’t you think? But no. Jackie’s been secretly rehearsing her own band for the past six months. On Saturday, January 15th she finally unveiled the acoustic trio at the Nameless Coffeehouse of First Church in Cambridge. Jackie Damsky and String River includes masterful guitarists Paul Mageau and Rich Caloggero along with herself. It’s extra hard to draw a crowd at Nameless because folk mecca Club Passim is (excuse me) across the street – and now sells wine and beer. But with a new group, a total question mark, it’s even harder to gather a good audience. Nevertheless Jackie and Co drew an enthusiastic full house for what turned out to be an amazingly well executed debut performance.
Shy Jackie never speaks onstage and has never sung in front of people. But she did both at Nameless as though it were characteristic. She engaged the crowd warmly and led them through the mix of tunes which couldn't have been more choice.
A furious pick and bow fest on the openers, Tennessee Hardwood by Aubrey Haynie and the traditional Whiskey Before Breakfast, was followed by a stunningly articulated homage to 1930s gypsy jazz guitarist "Django" Reinhardt -- and hey, that’s not easy to do! That piece, Gandhi’s Revenge, was composed by Jon Larsen & The Hot Club of Norvege. Jackie squeezed every drop out of Jay Unger’s plaintive Dilbert’s Tear before stepping into the vocalist’s spotlight herself for the wistfully clever jazz standard Comes Love (covered by both Billie Holiday and Ella Fitzgerald). Her neat facial expressions and elegant gesturing with the fiddle bow formed a nice bit of jazz cabaret.

Comes a rainstorm, put your rubbers on your feet
Comes a snowstorm, you can get a little heat
Comes love, nothing can be done

Comes a heatwave, you can hurry to the shore
Comes a summons, you can hide behind the door
Comes love, nothing can be done

Vassar Clements’ Lonesome Fiddle Blues was followed by the tour de force Tchavolo Swing by Durado Schmidt. Going once more to the jazz well, Jackie returned with a powerful reading of Bill Evans’ Waltz For Debbie. Set closer was Jay Unger’s Ashokan Farewell, one of the most beautiful waltzes ever written. Able to rip and run with the best of the acoustic players, Jackie Damsky and String River are not shy about doing the slow, achingly pretty ones too, even back to back and boldly crossing genres.
The impromptu encore, with the crowd on its feet, was the evergreen Makin’ Whoopie. Guest vocalist Susan Cunniff did herself proud on that and shone earlier on Melody Gardot’s signature blues, Worrisome Heart.
So watch out. Jackie Damsky and String River is ready for prime time and prime gigs. Contact Jackie at http://jackiedamsky.com

Rich Caloggero has been playing guitar for 25 years. He is at home playing rock'n roll, blues, bluegrass, country, folk, and funk. Rich is an incredible and crowd pleasing lead player. His influences include Tony Rice, David Grisman, and dobro maestro Jerry Douglas.

Violinist and now bandleader and vocalist Jackie Damsky was trained as a classical violinist. She found her true calling in folk music, acoustic rock, jazz, and blues after joining the Cambridge music scene in 2001. She has performed with over 40 musical acts and has recorded with 2 dozen artists. She adds her passionate and evocative tones to a wide and nuanced range of styles. She’s performed in Spain, France and Italy with Rod MacDonald, has opened for the Goo Goo Dolls accompanying Adam Ezra at the Paris Hotel in Las Vegas, and has a violin cameo appearance in the major motion picture Bride Wars with Kate Hudson. Visit Jackie at http://jackiedamsky.com

-------------
John Anthony Brisbin is a freelance writer and regular newspaper columnist widely respected for his oral histories of jazz and blues musicians, also his live music reviews and CD liner notes. He was longtime staff writer for Living Blues Magazine until, in his words, "all my beloved blues fathers went to their glory." He wrote two chapters (one on Jimmy Rogers, one on Willie Johnson) in Jas Obrecht's compilation, "Rollin' and Tumblin': Postwar Blues Guitar."